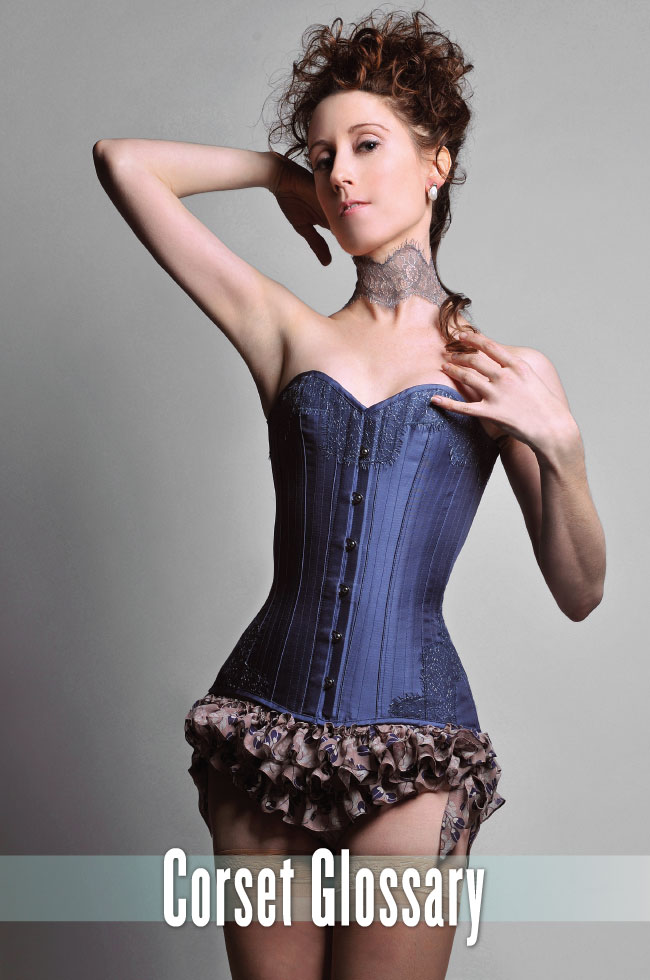 By Angela Friedman and Ali Cudby

Binding: the fabric or ribbon that covers the top and bottom edges of the corset, to prevent the garment fabric from fraying and the bones from popping out.

Bones / boning: the long, narrow pieces of steel that create the tautness and rigidity of a corset, preventing the garment from collapsing. Bones act like a spine, providing the vertical structure necessary to support all of the corset’s shaping. In high-end corsets, the boning is always steel, either flat steel (or “spring steel” – used for completely straight seams with less curvature) or spiral steel (which bends front-and-back as well as side-to-side for extremely curved seams). Cheaper corsets and bustiers frequently use plastic bones, which will quickly warp and bend out of shape.

Bone casing / tape: the tunnels of fabric or narrow ribbon that contain the bones. These can be on the inside of the garment, in between the corset layers, or on the outside (“external bone casings”) for a decorative look.

Busk: the front closure of a corset, consisting of two pieces of steel. One side has hooks and the other has knobs, which allows the parts to interlace and close the corset in the front. Some corsets have no busks at all, but it is much easier and quicker to get dressed with one. High quality busks are fairly rigid and do not bend substantially, providing strong support at the front of the body and between the breasts.

Bustier: A bustier is not a corset! Bustiers are longline bras, extending down from the breasts and over the top of the abdomen. They usually have stretch panels and only light boning (typically plastic), so the purpose of the garment is to gently smooth the torso, rather than compress the waist like a corset. Inexpensive lingerie brands frequently confuse the terminology between the words corset and bustier, referring to all longline bras as corsets.

Corset: A corset is a rigid, boned garment that covers a portion or all of the torso. Its purpose is to support the body and compress the waist to a smaller circumference than it is naturally. In order to do this, corsets are built of many shaped panels of stiff fabrics with structured seams and steel boning, and almost always feature lacing strings up the back.

Coutil: A specialty fabric used in quality corsets to build structure. Corset coutil is woven in a very fine and rigid herringbone pattern, which prevents stretching. While there are domestic (USA) manufacturers of coutil, the highest quality coutil is European in origin.

Cupped corset: A corset that has built-in seamed cups (much like a bra) to support and separate the breasts.

Flossing: Hand embroidery done over the tops, bottoms, or both ends of a corset bone and casing. Its original purpose was to secure bones in place, but it later developed into a decorative art. It’s typically quite expensive because of the extensive labor involved.

Gap: The backs of corsets are usually laced with a center back gap, meaning that the two back edges of the garment do not meet. This is purposeful for two reasons: First, it can be uncomfortable or even painful to wear a corset laced all the way closed with no gap, because the boning at the center back can chafe and dig into the spine and vertebrae. Second, purchasing a corset that has an intended back gap allows you to choose to lace the corset tighter in the future. This is great for weight loss or in expectation for more adventurous lacing in the future!

Garter tabs: small loops of ribbon along the bottom edge of the corset which allow detachable garter straps (or “suspender straps”) to be hooked into place in order to hold up stockings.

Grommets (or eyelets): Metal rings that create the holes with which to lace up the back of a corset. Grommets and eyelets may both refer to the same interlocking two-piece metal O’s, but the word eyelet may also refer to a simplified one-piece O that is less suitable for corsetry.

Lacing strings: Strong strings or ribbons used to lace up a corset. Ideally they are slick enough to not create too much friction when lacing up the garment, but have enough grip to hold a knot well.

Midbust corset: A corset that extends over the upper hips and torso, but only up to the nipple line where the top edge ends.

Mock up (or toile): A corset-like garment, usually a simplified version of a real corset created in cheaper materials, that is used to test the fit of a corset before committing to the final pattern. Mock ups are usually done by corset makers to practice a new sample style or to test the fit of a garment that is built to the custom measurements of the client. The information gathered from the mock up is later used to correct the pattern and achieve the perfect fit and design in the final garment.

Modesty placket / panel: A piece of fabric at the back of a corset that lies between the lacing strings and the skin. It provides protection against the chafing strings as well as maintaining the visual integrity of the design from the back.

Overbust corset: A corset that extends over the upper hips and torso to cover the breasts. It may or may not have a plunging neckline at the front, but the majority of the breast tissue is contained.

Reduction: The number of inches (or centimeters) than a corset reduces the wearer’s waistline. For a fashion corset, this is usually 3-4 inches, and for a tightlacing corset, it can be 4-8 inches (and beyond!). The amount of reduction that is possible depends greatly on the wearer’s body type and commitment to frequent wearing. For example, an athletic or muscular woman may only be able to achieve a 2” reduction even after wearing corsets for years because muscle doesn’t compress in the way that fat does. Meanwhile, a fleshy woman may be able to compress 6” the first time she wears a corset, because her tissue is simply more easily manipulated.

Tightlace / tightlacing: A practice that, over time, continues to reduce the waistline of the wearer. Tight lace enthusiasts refer to the practice as “training” and may wear their corsets up to 23 hours a day, gradually lacing tighter and tighter to achieve a particularly exaggerated silhouette.

Underbusk placket / panel: A piece of fabric at the front of a corset that lies between the busk and the skin. It provides a clean line with no peek-a-boo at the center front, as well as protecting the wearer’s skin from being accidentally pinched in between the two halves of the busk.

Underbust corset: A corset that only covers the upper hips and middle torso, with no breast coverage at all.

Waist cincher / waspie: A short corset (smaller than an underbust) that only covers the middle of the stomach area. These can be worn as outerwear like structured belts or with other lingerie pieces.

Waist tape: A soft ribbon that runs along the waistline of a corset to prevent the garment from ever stretching at that crucial point. Sometimes these float between the layers of the corset, so you might not be able to see it in a finished garment.

Ali Cudby has put together this incredible Retail Advice feature for retailers called: Corsets: The Keys to Buying, Merchandising and Selling. 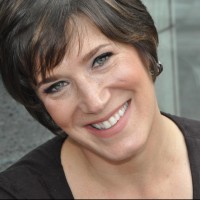